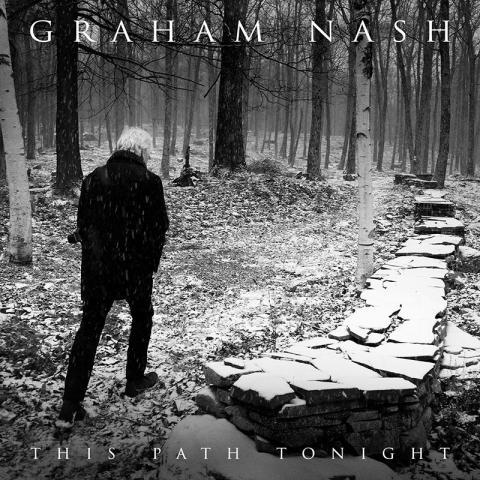 “Look no further than the many pensive black and white photos, most with Graham Nash’s eyes either hidden behind shades or turned away from the camera, to get a feel for this reflective, atmospheric, sometimes brooding album. “Where are we going?” he asks on the opening title track, and “What are you going to do when the last show is over?” on the closing one. It goes to show that, even at 74 with more than five decades as a professional musician (he started singing in the Hollies at 20), Nash still has more questions than answers.” – AMERICAN SONGWRITER

“A starburst of glorious harmony . . . the thought occurs that This Path Tonight could be Nash’s very own Blood On The Tracks . . .” - UNCUT

“All the elements you’d want are there: acoustic guitars, harmonicas, harmonies . . . and that Mancunian accent” - SHINDIG

“ The path navigated by the folk-rock veteran — still in fine voice — is the road to rediscovery . . . With producer Shane Fontayne adding dimension and tension to the music, Nash’s first album of originals in 14 years is marked by hope . . .” - BOSTON GLOBE

“Trace elements of the same passion that drove him through his work with The Hollies and then Crosby, Stills & Nash (and sometimes Young) are clearly audible on This Path Tonight, though the Blackpool-born singer is obviously in a very different place now.  This Path Tonight is simply Nash continuing to be as present as possible for everything he experiences and recording the results. It's what he does.” – NPR

“What a pleasure it was recording this album,” says Graham Nash. “Shane Fontayne and I had written 20 songs in a month and recorded them in eight days. I felt comfortable on day one even though I’d never met some of the musicians before that moment. Shane, who produced the album, put together a great band: Todd Caldwell (Hammond organ), Jay Bellerose (drums, percussion), Jennifer Condos (bass), Patrick Warren (piano), Shane Fontayne (guitars).  My music has a different feel to my earlier albums although I hear echoes of each one.  This journey of mine was one of self-discovery, of intense creation, of absolute passion. Enjoy!”

Nash is set to hit the road along with guitarist and producer Shane Fontayne next week with dates in the US and Europe. He will continue his long-time tradition of getting cash for charity through the Guacamole Fund’s special benefit seats; in addition, he will be donating $1 per ticket sold to charity. Tickets, VIP packages, and Guacamole Fund benefit seats are available at bit.ly/gnasheupr.

“When you strip a song down to its very essence, you either have a song worth singing… or you don’t,” says Nash. “Playing music with Shane Fontayne is and always will be very satisfying. He has an innate sense of ‘performance’ and of arrangement. He never loses sight of the fact that the song must ‘come alive’, must have a reason for being sung in the first place. We want to look in the eyes of our audience, we want to know that we are connecting on a very real level.”

Graham Nash is a two-time Rock and Roll Hall of Fame and Songwriter Hall of Fame Inductee, Grammy Award winner, a New York Times best-selling author, and Officer of the Order of the British Empire (O.B.E.)

For more information about Graham Nash – This Path Tonight, please contact Michael Jensen at Jensen Communications at (626) 585-9575 or info@jensencom.com.

3. Cracks In The City

2. Watch Out For The Wind